Piggy foxy and the sword of revolution 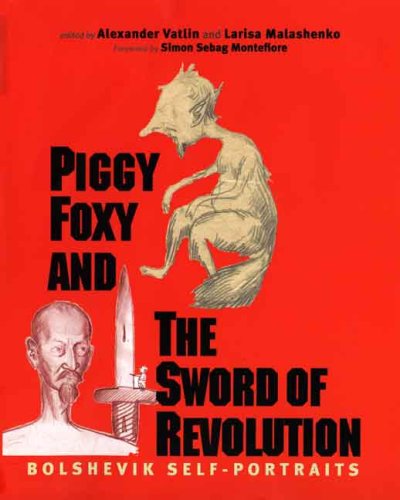 What did the rulers of the Soviet Union truly think about each other? Piggy Foxy and the Sword of Revolution provides a window onto the soul of Bolshevism no other set of materials has ever offered. Sketching on notebook pages, official letterheads, and the margins of draft documents, prominent Soviet leaders in the 1920s and 1930s amused themselves and their colleagues with drawings of one another. Nearly 200 of these informal sketches, only recently uncovered in secret Soviet files are reproduced here. Funny, original, spontaneous, sometimes vicious or grotesque, the drawings and their accompanying notes reveal the relationships and mindsets of the Bolshevik bosses at the time of Stalin’s rise to power with blazing immediacy. The album’s editors select characteristic drawings by such prominent leaders as Nikolai Bukharin, who depicts himself as ?piggy foxy,” Valery Mezhlauk, and Stalin himself, whose trademark blue pencil appears on several of the drawings. A number of sketches of unknown authorship are also included. The editors identify the political issues, events, and discussions that inspired the drawings, and they provide biographical information about the people who drew and were drawn. The book opens a rare window on Stalin’s inner circle, allowing us access to the powerful men who, despite living in a humorless epoch, developed a special humor of their own.