The crisis of russian democracy 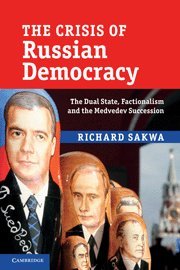 The view that Russia has taken a decisive shift towards authoritarianism may be premature, but there is no doubt that its democracy is in crisis. In this original and dynamic analysis of the fundamental processes shaping contemporary Russian politics, Richard Sakwa applies a new model based on the concept of Russia as a dual state. Russia's constitutional state is challenged by an administrative regime that subverts the rule of law and genuine electoral competitiveness. This has created a situation of permanent stalemate: the country is unable to move towards genuine pluralist democracy but, equally, its shift towards full-scale authoritarianism is inhibited. Sakwa argues that the dual state could be transcended either by strengthening the democratic state or by the consolidation of the arbitrary power of the administrative system. The future of the country remains open.