The autobiography of Joseph Stalin 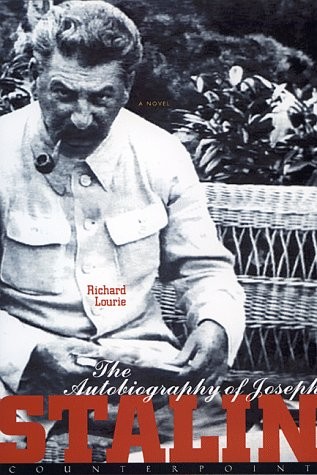 In a brief poem written in response to the Soviet invasion of Czechoslovakia, W.H. Auden ridiculed the inexpressive nature of tyranny and tyrants: "One prize is beyond his reach, / The Ogre cannot master Speech." Now, it seems, the translator and novelist Richard Lourie has set out to prove Auden wrong. In The Autobiography of Joseph Stalin, he lets that chuckling despot tell his own story, from his obscure origins in the Georgian sticks to his bureaucratic apotheosis as ruler of all Russia. In part Stalin simply wants to get his life down on paper. But as he informs the reader, he's also trying to launch a preemptive strike against his arch-nemesis, Leon Trotsky, who's currently compiling a scurrilous (i.e., fundamentally accurate) biography of Stalin in Mexico City. Given this scenario, many a novelist would have turned Uncle Joe into an articulate monster, a kind of Bolshevik Iago. Lourie takes a different route. Oh, his narrator does have a gift for poetic doublespeak, which comes into play during his ruminations on the 1938 Moscow show trials: "In a certain highly literal sense of the word, most of these men are not guilty of most of these crimes. They may, however, be guilty of many other crimes, crimes for which the state has decided to spare itself the expenses of a trial but which would have cost them their head in any case." He also gets off some memorable character sketches, like this one of Lenin: He was five feet three at most but so solidly planted on the floor that he made you feel the smaller man. As the Hungarians say, his forehead reached to his ass, but his baldness was dynamic, not pathetic--as if intense thought had sent the hairs flying from his scalp. He wore a three-piece suit and had the lawyer's habit of hooking his thumbs inside his vest. Still, Lourie's Stalin is very much a meat-and-potatoes stylist--perhaps blood-and-guts would be the more appropriate epithet, considering the number of corpses he leaves in his wake. His raw efficiency as a narrator does have its black-comic charms, however, and his race to the biographical finish with Trotsky gives the book a powerful momentum. (Students of history will recall that the narrator's rival was brutally cut off in mid-sentence.) And what would be the moral of Stalin's story, at least in Lourie's version? There are two, which should surprise nobody: Always watch your back and It's lonely at the top. --James Marcus.