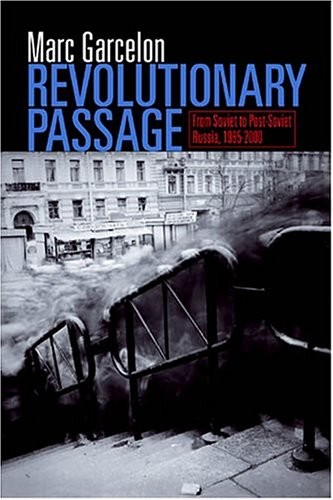 "Revolutionary Passage" is a cultural, social, and political history of Russia during fifteen crucial years. Garcelon traces this history from perestroika to the rise of Vladimir Putin, and argues that the pressures put on the soviet system by Gorbachev's reforms gave birth to movements for democratic reform, but that the political arrangements that gave rise to the fall of communism in fact killed hopes for reform; Garcelon shows that these arrangements have been part of Russian history from the czarist era through the communist and contemporary periods. The heart of this book is a close examination of the DemRossiia movement, which Garcelon argues helped to dismantle the soviet system, but was also post-soviet Russia's first victim as the country realigned itself with external forces (like globalization and US-style economic reforms) and internal forces (such as traditional rigidities in Russian society and the subordination of movements to Boris Yeltsin's leadership).