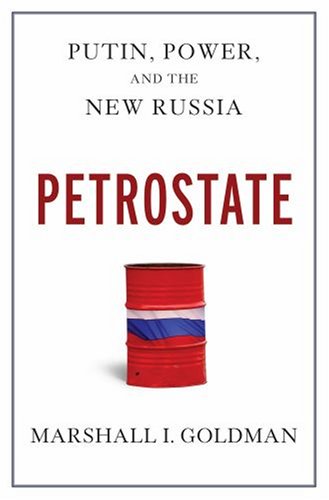 In the aftermath of the financial collapse of August 1998, it looked as if Russia's day as a superpower had come and gone. That it should recover and reassert itself after less than a decade is nothing short of an economic and political miracle. Based on extensive research, including several interviews with Vladimir Putin, this revealing book chronicles Russia's dramatic reemergence on the world stage, illuminating the key reason for its rebirth: the use of its ever-expanding energy wealth to reassert its traditional great power ambitions. In his deft, informative narrative, Marshall Goldman traces how this has come to be, and how Russia is using its oil-based power as a lever in world politics. The book provides an informative overview of oil in Russia, traces Vladimir Putin's determined effort to reign in the upstart oil oligarchs who had risen to power in the post-Soviet era, and describes Putin's efforts to renationalize and refashion Russia's industries into state companies and his vaunted "national champions" corporations like Gazprom, largely owned by the state, who do the bidding of the state. Goldman shows how Russia paid off its international debt and has gone on to accumulate the world's third largest holdings of foreign currency reserves--all by becoming the world's largest producer of petroleum and the world's second largest exporter. Today, Vladimir Putin and his cohort have stabilized the Russian economy and recentralized power in Moscow, and fossil fuels (oil and natural gas) have made it all possible. The story of oil and gas in Russia is a tale of discovery, intrigue, corruption, wealth, misguidance, greed, patronage, nepotism, and power. Marshall Goldman tells this story with panache, as only one of the world's leading authorities on Russia could.