Collapse of an empire 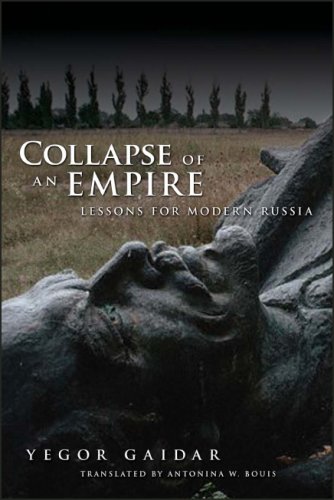 In today's Russia, nostalgia for the Soviet era is growing. Many Russians reflect wistfully on the passing of an era when the Soviet Union was a superpower, commanding international respect, and they blame its demise on external enemies and foolish changes in policy. In an address to the Russian Federal Assembly, President Vladimir Putin called the breakup of the Soviet Union the greatest geopolitical catastrophe of the 20th century. In Collapse of an Empire: Lessons for Modern Russia, however, economic reformer and former prime minister Yegor Gaidar clearly illustrates why such notions are misguided, ill informed, and dangerous. As he explains in the introduction: "My goal is to show the reader that the Soviet political and economic system was unstable by its very nature. It was just a question of when and how it would collapse." Although the Soviet Union never referred to itself as an empire, it fit Gaidar's definition: "a powerful multiethnic state formation in which the power (or at least the right to vote) is concentrated in the metropolis and its democratic institutions (if they exist), though the power and those institutions do not extend to the entire territory under its control." The U.S.S.R. sat on a shaky foundation of far-flung lands, conquered peoples, centralized authoritarian government, and a command economy overly reliant on natural resources. Gaidar explains why this once-powerful state was doomed to fail eventually, and why Russians should be looking forward rather than backward in building their nation. He worries that Russia is repeating some of its tragic mistakes, including uneven economic development that leaves the nation vulnerable to fluctuations in the energy market. Gaidar uses the Soviet case as a device for understanding the life cycle of empires, which found themselves at the wrong end of history in the twentieth century. World War I spelled the end for the Hapsburgs, Ottomans, and Romanoffs, for example, and Europe's overseas empires began breaking apart after World War II. In the 1990s, the final remaining territorially integrated empire-the Soviet Union-fell. This is no mere coincidence: "The dissolution of empires in the twentieth century is a component of the process of global change that is called modern economic growth." To reproduce such a flawed model of governance would be a tragic mistake, yet many Russians still look backward through rose-colored glasses as their government centralizes power again. Such misplaced nostalgia defies reality while it imperils the future of Russia and its people.